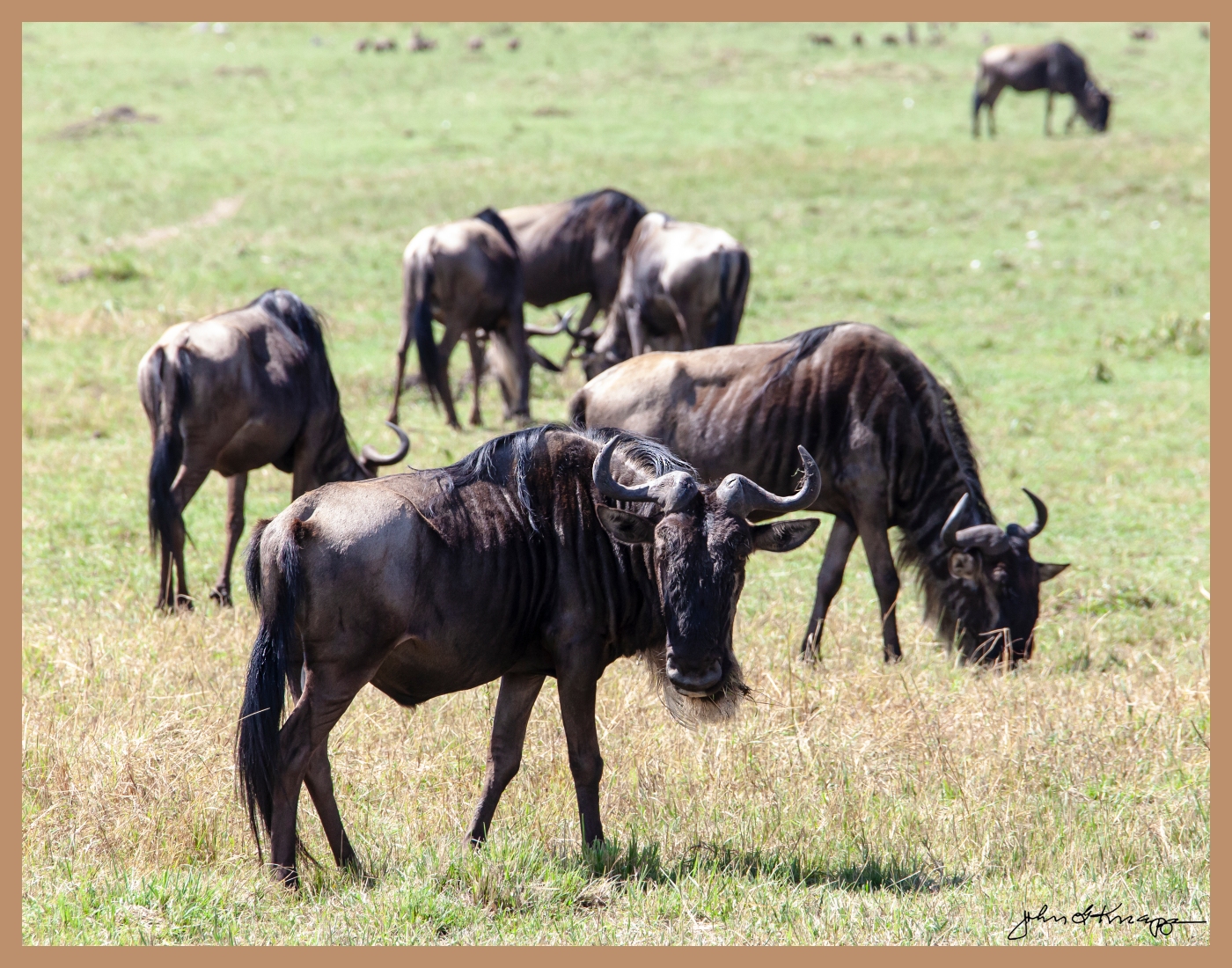 The last few days of our expedition gave meaning to our adventure. We were in the Kenyan Maasai Mara, thrilled by the larges animal migration of on Earth.

On the cover photo is a group of blue Wildebeest. AKA the common wildebeest Connochaetes taurinus) it is a large antelope found in Kenya and Tanzania.

The Maasai Mara of Kenya is contiguous with the planes of the Serengeti National Park and the Tanzanian National Park. All are part of the Serengeti plane. These images are from the Kenyan Maasai Mara National Reserve. It was the most favorable point to observe the Great Migration when we were there. As the weather changes from dry to the rainy season the grass regrows. It is the grass which provides food for the grazing animals. This is irresistible to the wildebeest, zebra, impala, buffalo and other animals who follow this growth by the millions. The dead grass remains after the tops have been eaten to the ground or burned off. The rain brings a fresh regrowth. This regrowth replaces the razor-sharp stubble with soft young plants.

One of the most thrilling wildlife spectacles on earth was spread before us like pepper on a salad. We stopped to watch this ancient migration sight that this area supports. You can see in every direction that the savanna is covered by hundreds of thousands of animals. It is hard to comprehend that they actually number in the millions. They are visible to every horizon, slowly moving to follow the fresh growth. They meander about eating and mingling, occasionally fighting and challenging one another for mating or protecting one another from the daily challenges of survival, reproduction, and predation. For reasons unknown to us they may gallop along following some instinct or stamped when startled or frightened. It is this cumulative picture of integrated behavior based on soil, seasonal weather, prolific plant life and a massive accumulation of thousands of animal species which underscores the interdependency of this huge ecosystem.

We did cross the Mara river and its tributaries where crocodiles and hippopotamuses were swimming or simply resting. The hungry crocodiles were ready at a wildebeest crossing to take advantage of the weakest or most vulnerable animals. We did not see this classical behavior but none-the-less the trap was set. Predators and scavenger animals follow this migration in the ladder of primacy with the lion at the apex.

The wildebeest is the keystone animal of this ecosystem. It is the primary consumer of the grasses. It has a high reproductive rate. It is the resource upon which all of the carnivores and scavengers depend. They till and fertilize the soil. A single calf is born after 8.5-month gestation. Bands of female wildebeests are in control, leading the entire herd towards new grasslands. In the mid-20th century, the wildebeest population was decimated. The herd was cut down to one third of its normal size because of the rinderpest viruses (a variant of the measles virus). It originated and was spread from domestic livestock. As a result of loss of the grazing animals the grass lands grew uncontrolled. This over-growth subsequently changed the natural fire regime to an intense wildfire which burned nearly the entire Serengeti. This was an ecological disaster. Millions of domestic animals also died. Plant and animal species collapsed. Because of a massive human intervention including vaccination and quarantine the wildebeest population has been transformed. The Serengeti and Maasai Mara have been magnificently rewilded and the population of these animals is back to a stable 1.5 M with no disease detected in the last 8 years. Perhaps my 30 year wait to go was helpful because it allowed the wilderness more time to recover.

The sight of all these animals and the resource to feed and accommodate all of them provides a small but expanding view of the might of the ecosystem. At one time in the distant past this view would have been quite prosaic. Imagine Neanderthal or possibly the older Cro-Magnon people living with this type of annual migration. They would have been part of it. They would have been much earlier than our current view of history, but it probably looked like the American Great Basin to the First Peoples and early settlers of the Americas. We must appreciate that this area is just a few hundreds of miles from the Olduvei (Oldupai) gorge where Lewis and Mary Leakey (beginning in 1937) found fossilized hominoid remains dating back hundreds of thousands of years. (Pronconsul 25 million years old).  What were those people thinking when they saw this sight? The ancient hominoids and modern tribal peoples were and still are intimately connected with this environment. Their moment-to-moment survivals depended upon understanding this grand recipe and also the small, intimate details of their surroundings. The people of the Maasai tribe move their domesticated herds in synchrony with the wildlife, plants and rainfall. They know this because of their exposure to a multigenerational experience. They now participate in separation of their herds of domestic cattle and vaccination from Rinderpest and Foot and Mouth disease. We were so poorly prepared to comprehend systems as complex as this in just a few days.

I think that there are many lessons to be learned from this. For at least a million years hominoids and humans have learned that living in harmony with the constantly changing environment is a prerequisite to survival. The environment changes including geologic-like continental drift and volcanism. Weather changes, due to wind and rain/snow, land slides and floods, drought, temperature and storms. Species changes with mutations and natural selection. Human behavioral changes including perception and interpretation of surroundings, the value of group behavior and behavioral adaptation by creation of societies. Society changes with development of institutions like religion and governments. Behavior changes lead to exploration, discovery, invention and industrialization. The nomadic herders of today who live in near Stone Age conditions with cell phones will change. What changes will Space Age people make? We, the people of the space, information and atomic age have the ability to affect all of the aforementioned changes. We have the opportunity to do so because we live with disposable wealth and a discretionally directed time.

From the successful story of the rewilding of wildebeests in the Serengeti we have started on a new path. The wildebeest story is considered one of the most successful rewildings of our time. Rewilding efforts have been remarkably successful in Yellowstone, Spain, Argentina, Switzerland, ocean reef areas and many more. These efforts can not only save species and restore habitats but also fight the climate change crisis. Rewinding Florida is an active effort and a topic worthy of further exploration and discussion.

If you wish to receive notification for new postings please enter your email and click on subscribe. If you also wish to participate in discussion or make comments please leave a reply.

I thought that you may be interested in this